This winter we’ve been making it a priority to get outdoors and explore as often as possible. We’ve been getting out once or twice every week even in the cold, snow and rain. And believe me, no one hates being cold more than I do! I don’t drive so we usually get around by bike. In the winter we usually don’t ride as far and our adventures tend to be closer to home. 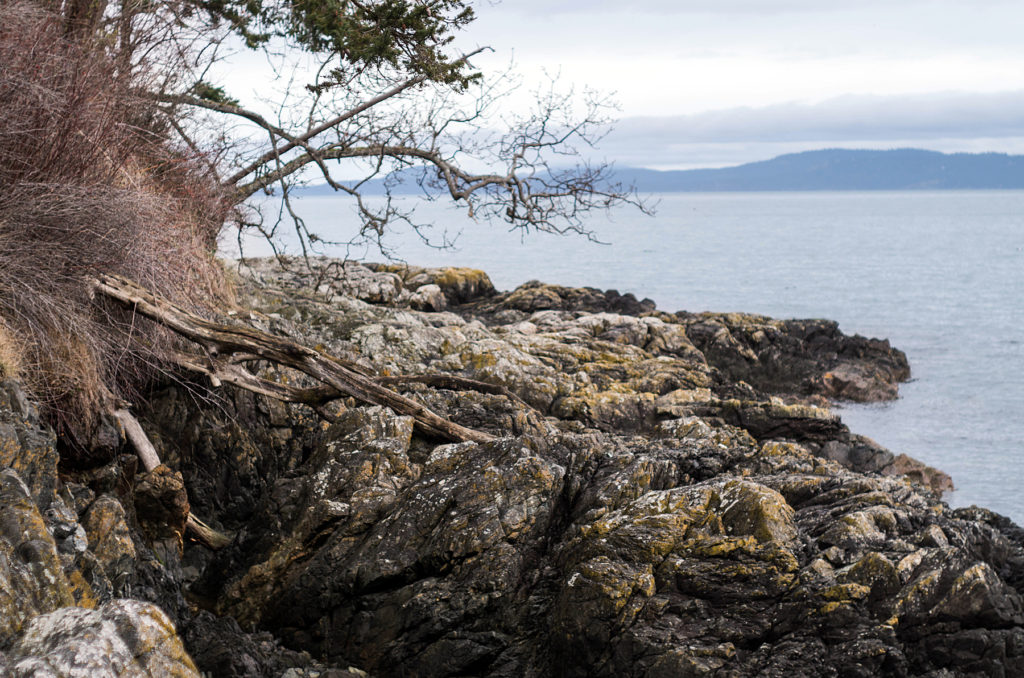 Fortunately we live in a beautiful corner of Victoria right between Mt. Douglas Park and Cadboro Bay so that we’re surrounded by beautiful beaches. Gordon Head has some of the lesser known and most beautiful beaches in Victoria. Arbutus Cove is more popular than some of the others and it’s a favourite of ours in all seasons. There are few things I love more than desolate beaches, so winter is the perfect time to explore. 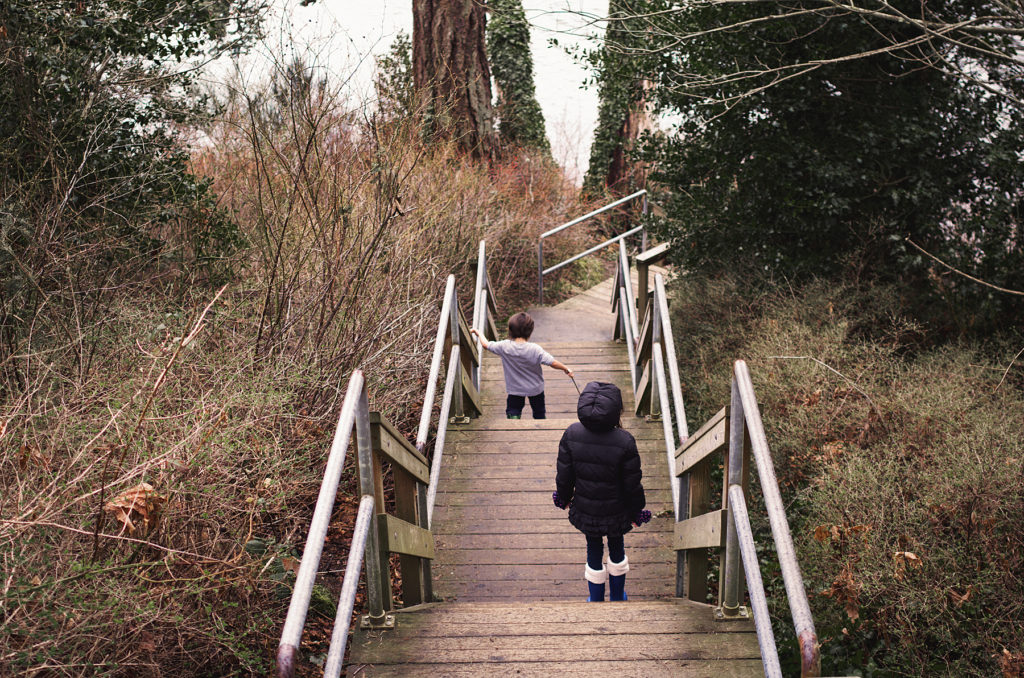 At the beginning of March the weather was still very wet but it was finally warming up to our usual mild temperatures. It was the perfect day to wander down to Arbutus Cove. It was raining a little when we set out but it ended up being a lovely afternoon. It was the first day where it felt like spring was finally on its way. Except for the evergreens and glossy Arbutus leaves, the brush surrounding the cove was bare. The beaches were full of wet driftwood washed up from winter storms. Instead of all the brown and grey feeling dreary and dead, the subtle tones of gold and silver shone through to create an earthy yet slightly magical scene. 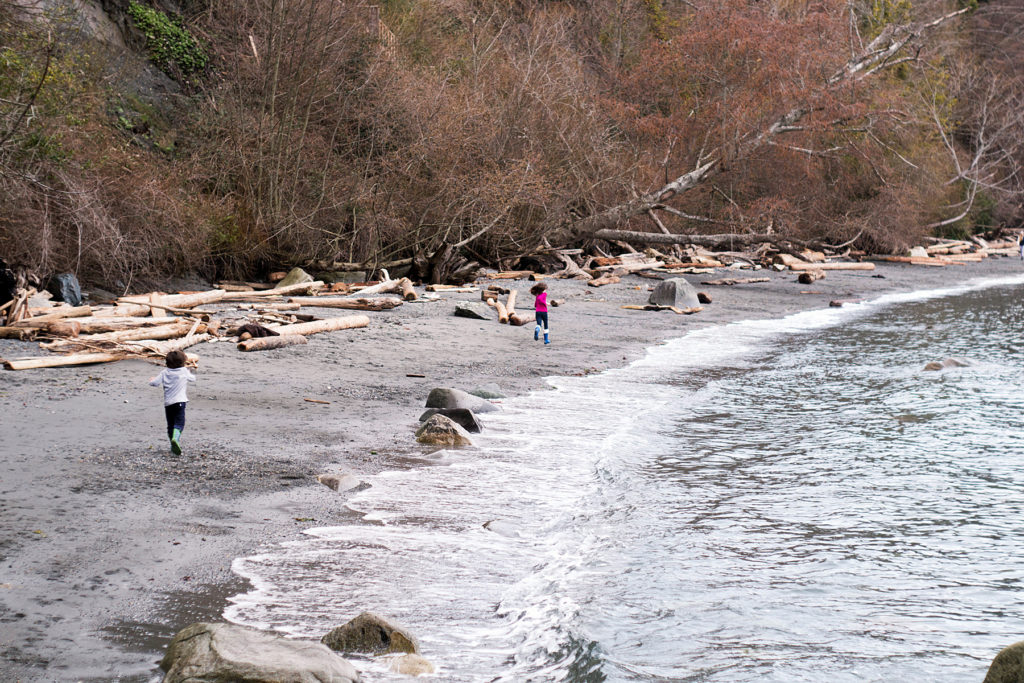 Arbutus Cove is part of the larger Finnerty Cove that defines Gordon Head’s coastline. Most of the time the beaches are called specific names by locals, but if you’re looking for tide charts, Finnerty Cove seems to be the official name for this area. On this day the tide was high, so we were unable to cross over to the next beach, Hollydene, which is by far Gordon Head’s nicest beach if you’re looking for sand and a place to swim in the summer. In the winter we prefer the Arbutus Cove side because it’s a longer stretch of beach to explore with more driftwood to climb, rocks to toss, and sea glass to find. The Arbutus Cove entrance also has a beautiful expanse of green park and of course its signature giant Arbutus trees. The giant Arbutus at the edge of the park is the most magnificent anywhere in Victoria. The scene of Haro Straight behind those Arbutus trees always gets my heart racing even before we get to the stairs down to the beach. 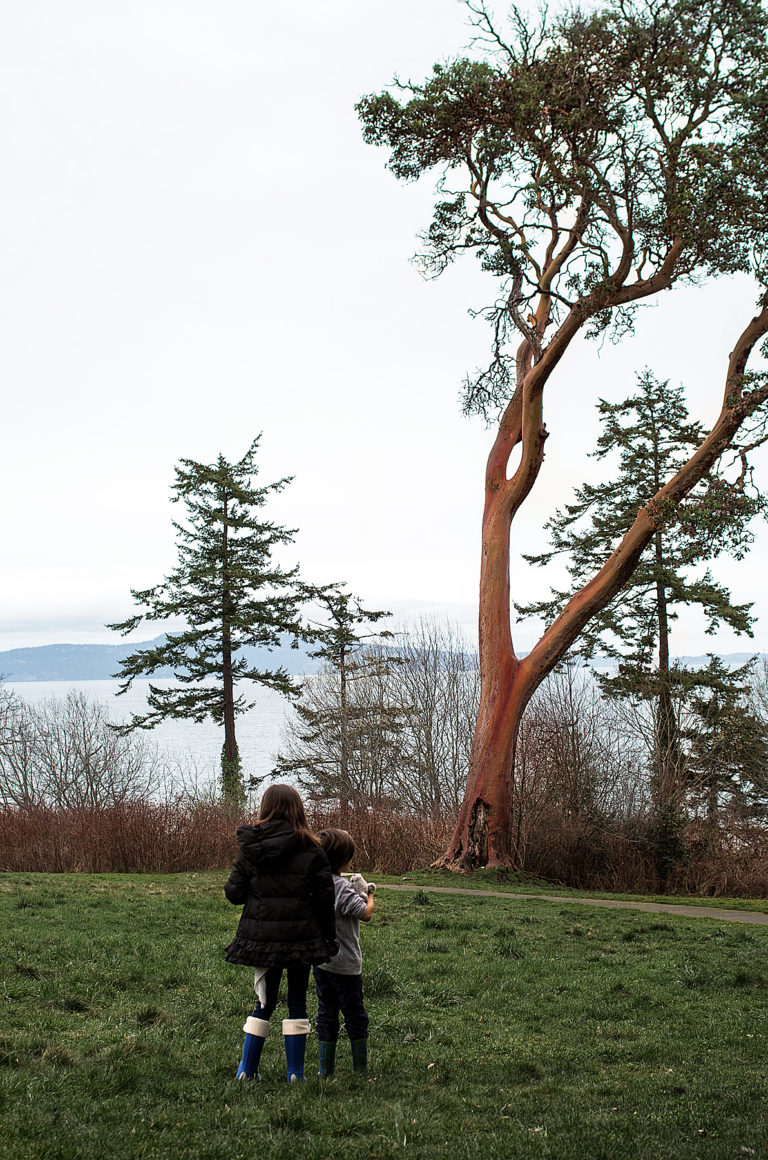 The view from the top of the stairs down to the beach is also enthralling. Usually we don’t check the tide charts before heading out so it’s an exciting surprise to see what the landscape is like on each trip. When the tide is out it’s a glistening expanse of beach with sand bars and tidal flats. On a summer day you can usually find a group of local kids skim boarding at low tide. Most of the year Arbutus Cove is fairly empty of people except for dog walkers. It seems to be one of the few beaches that allow dogs in all seasons. We don’t have a dog, but we enjoy watching them fetch sticks and chase after geese. 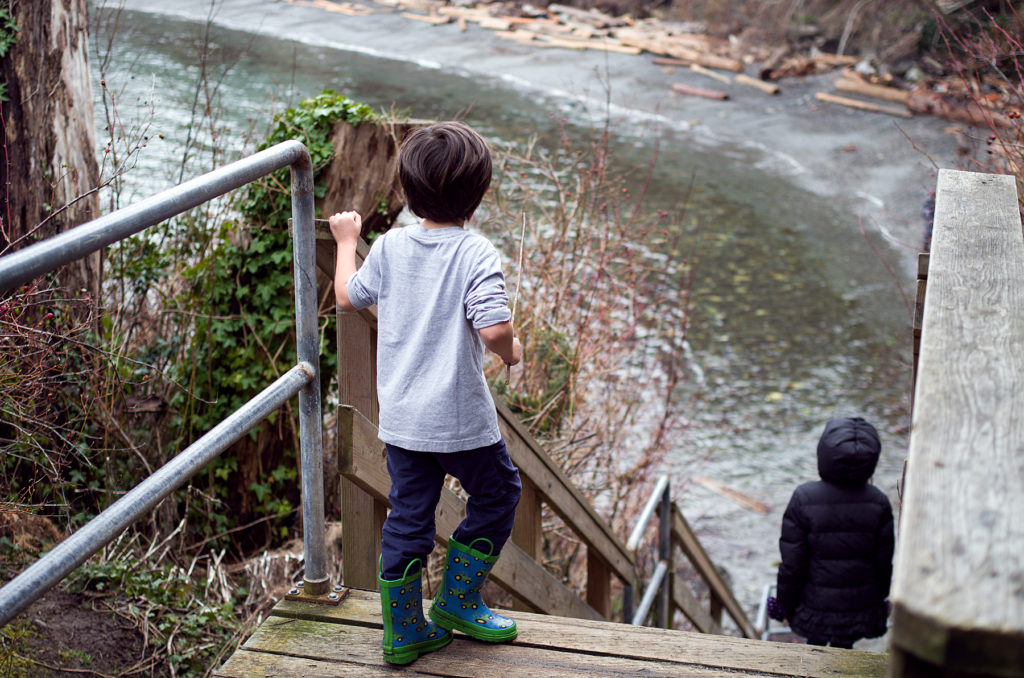 Once down the stairs, we have the option to continue on to explore the stretch of sandy and pebbly beach, or double back and climb along the rocky outcrop behind and to the left of the stairs. These rocks are characteristic of this area of the coast — a solid formation of rugged coastline, dotted with tide pools in the low places and rising steeply into the trees. This is where Arbutus trees thrive, hanging out over the rocks. There are some thrilling spots to storm watch along this shore, although on this day there was hardly any wind. 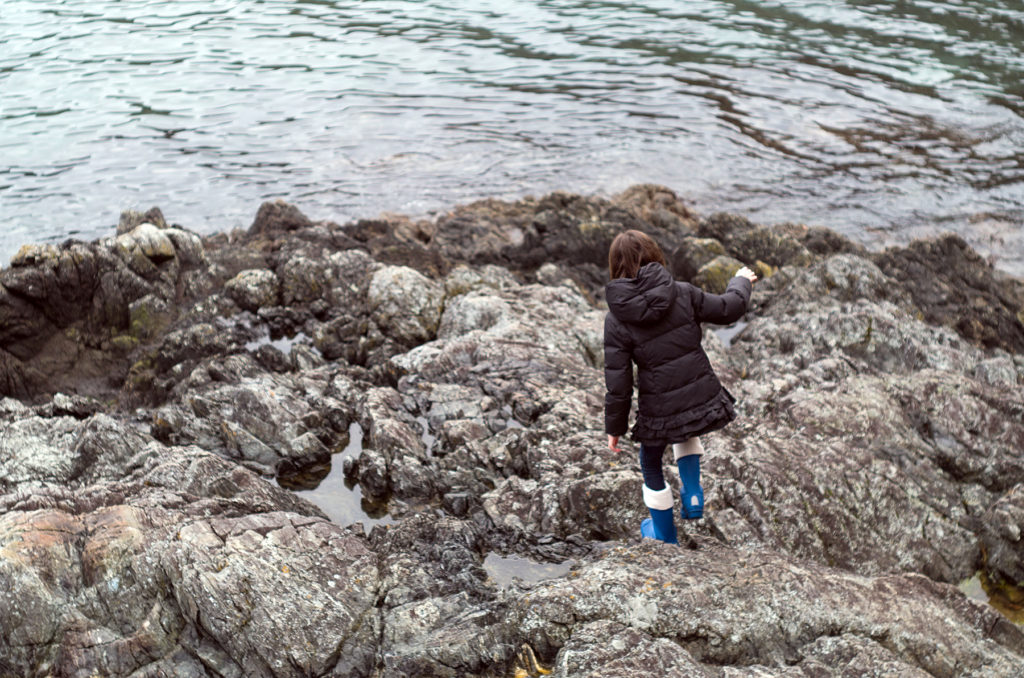 The kids especially love the challenge of climbing along the steep shoreline. I watch with trepidation and try really hard not to yell “be careful” every 30 seconds. On this trip they managed to get pretty far before I told them to stop before a particularly steep cliffy part. I struggled to keep up while holding my camera, hindering my climbing abilities. 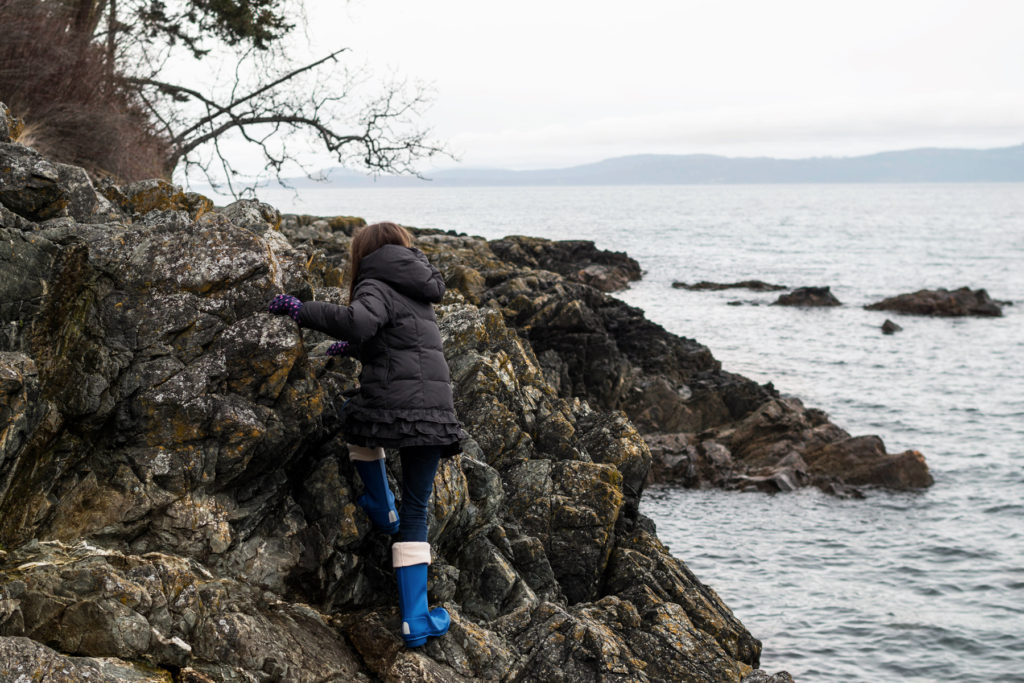 Gracie especially loves this activity now because her legs have gotten so long, she’s able to climb easily over any terrain. Thomas has a harder time keeping up, but he’s very determined so is always right behind her. They settled in high perches on the rocks to watch for whales. We haven’t seen whales from this spot before, but we have seen pods of orcas from adjacent beaches, so we’re always hopeful. This time we ended up watching a couple of ducks diving and catching fish. 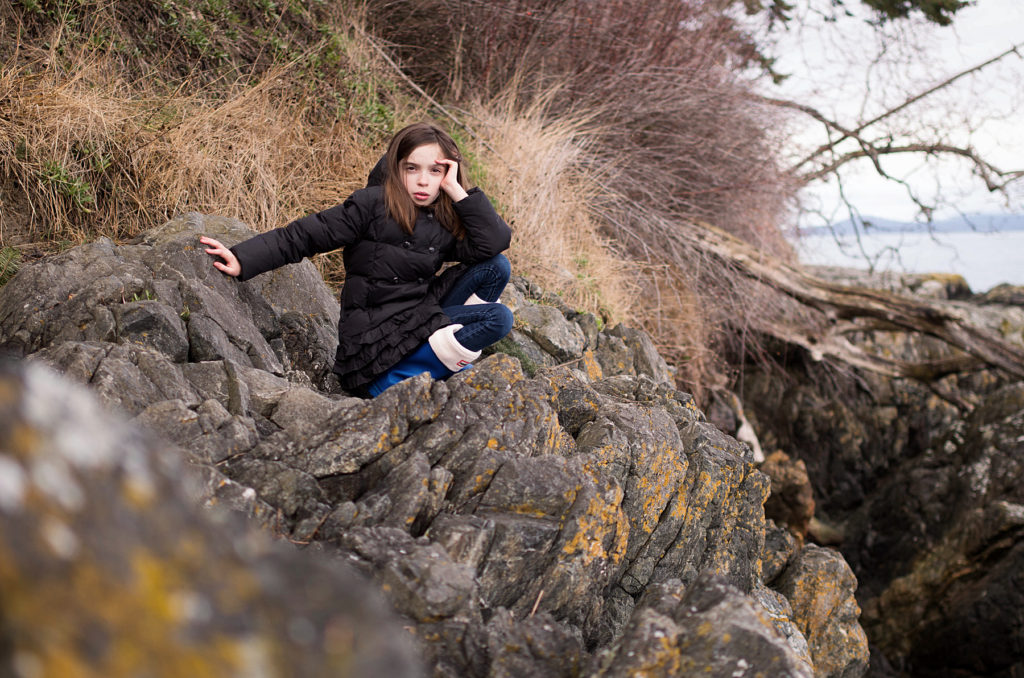 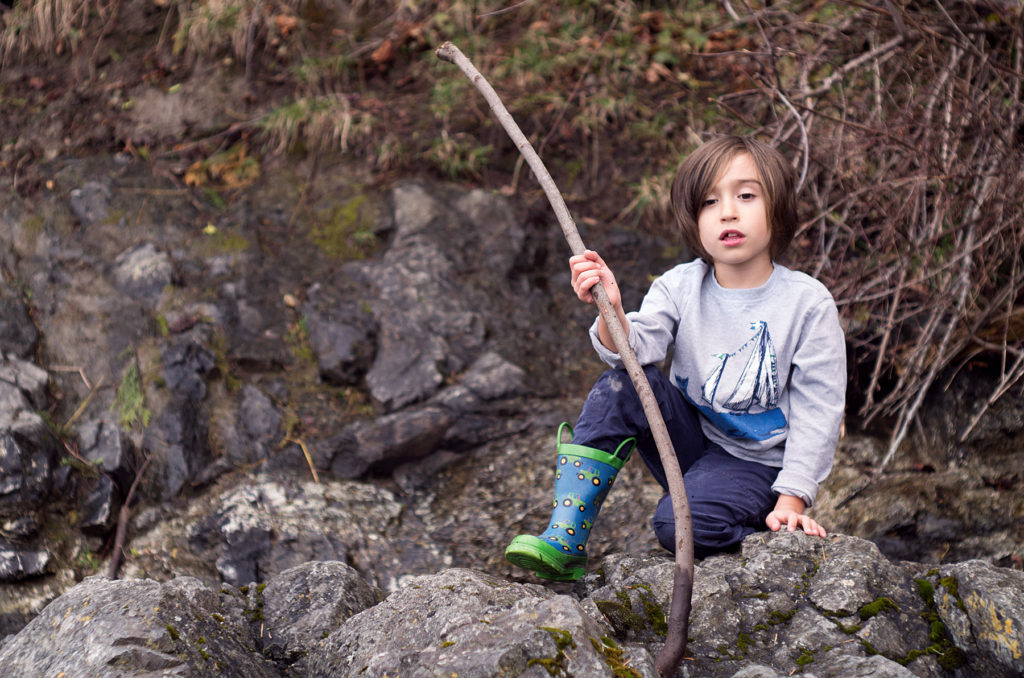 Eventually we made our way back down to the beach. I was the only one who slipped, and luckily it was only down a small clay bank so I was muddy but uninjured. I prefer winter for this kind of exploring because we’re all covered up and less likely to get cuts and scrapes. In the summer climbing on the rocks can be especially perilous because of the sharp barnacles on the lower rocks. We’ve had many misadventures with barnacles. 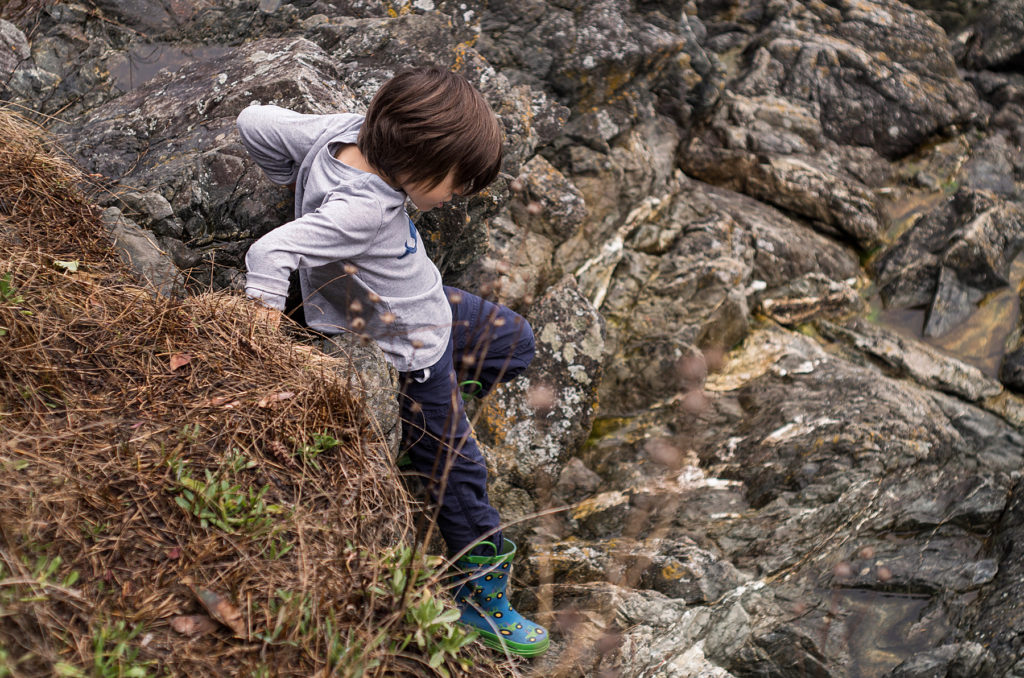 Back on the beach, Thomas found some wood to pretend to surf on, and Gracie commenced her dedicated search for seaglass and pretty shells. The best thing is just wandering very slowly down the beach discovering all the little details. We always wear rain boots to the beach when it’s too cold for sandals, that way we can play right on the edge of the surf. The kids love throwing stones, finding sticks, writing in the sand, searching for treasures, and climbing along the driftwood. The very best part for me is always just listening to the waves. 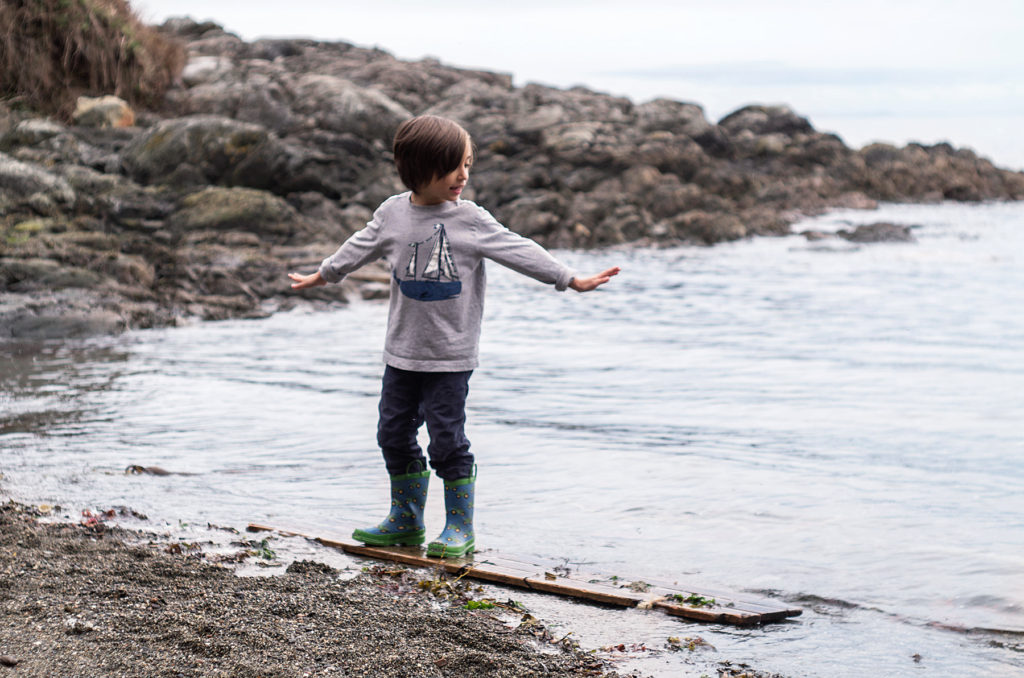 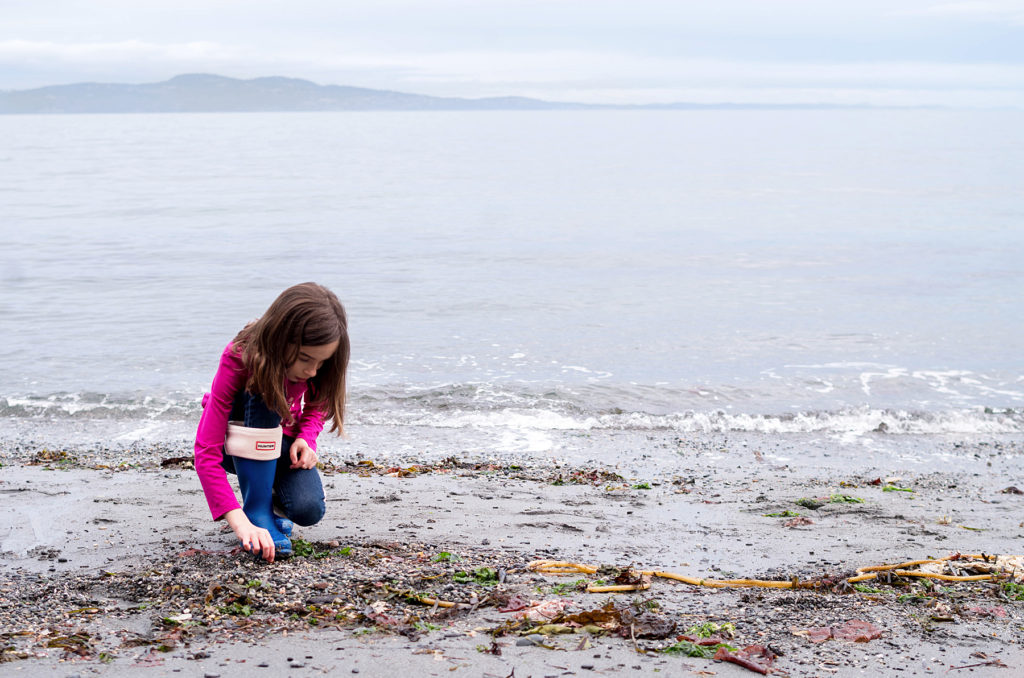 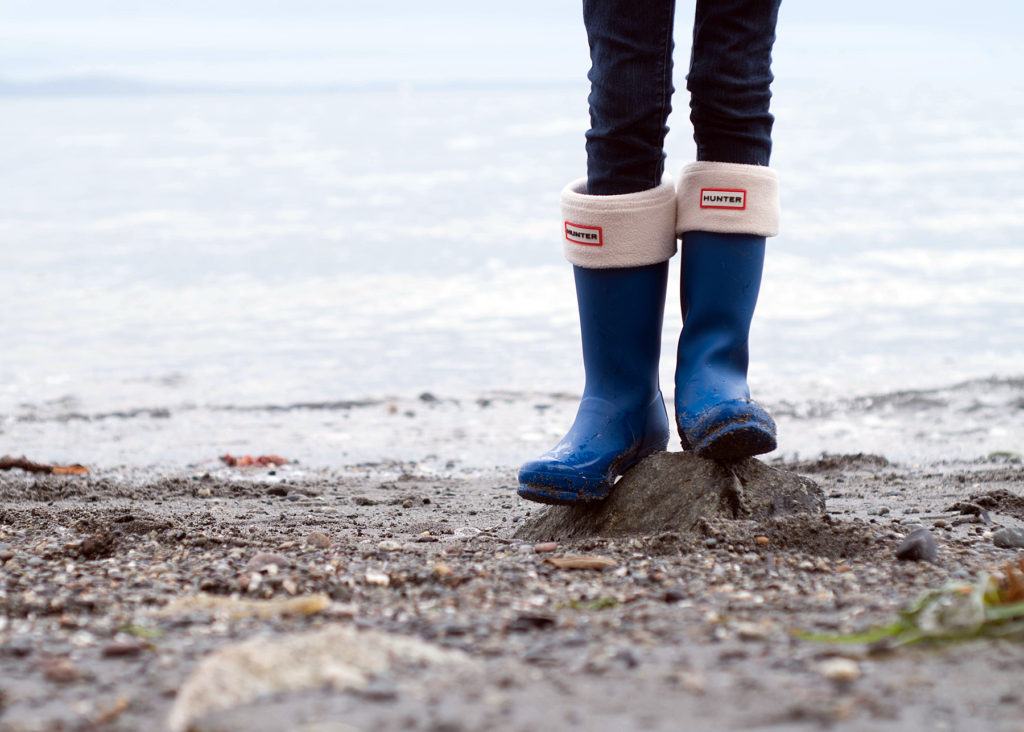 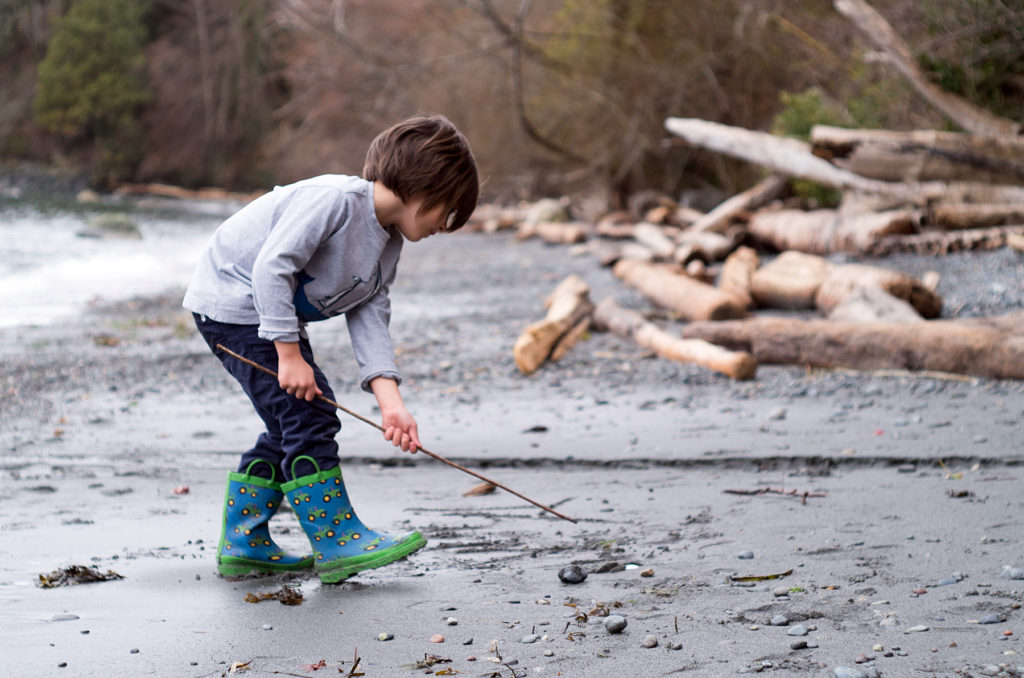 Sometimes, if we’re lucky, we’ll discover fun additions to the beach such as beach forts and rope swings. We found a couple of swings on the beach that day but the first ones were too high up for the kids to enjoy very well. Then Thomas found a nice low rope to play on. I’m always grateful to whomever sets up these engaging attractions. An old rope tied around a tree leaning over the beach can be a great source of enjoyment. They took turns swinging for a long time and I’d probably never have coaxed them off of the beach if they didn’t eventually get hungry. 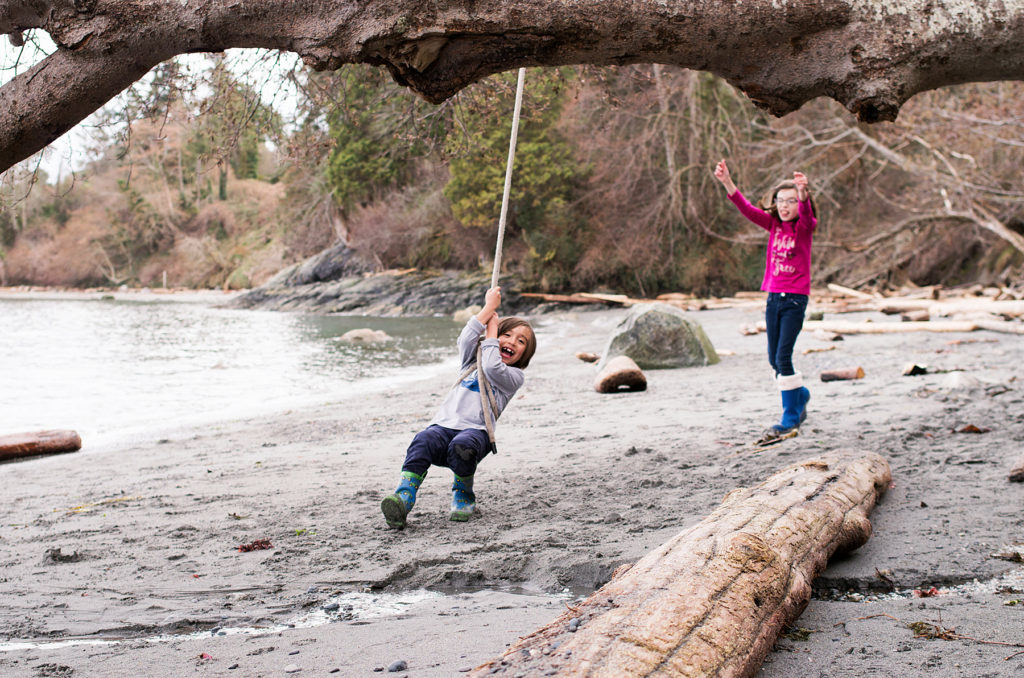 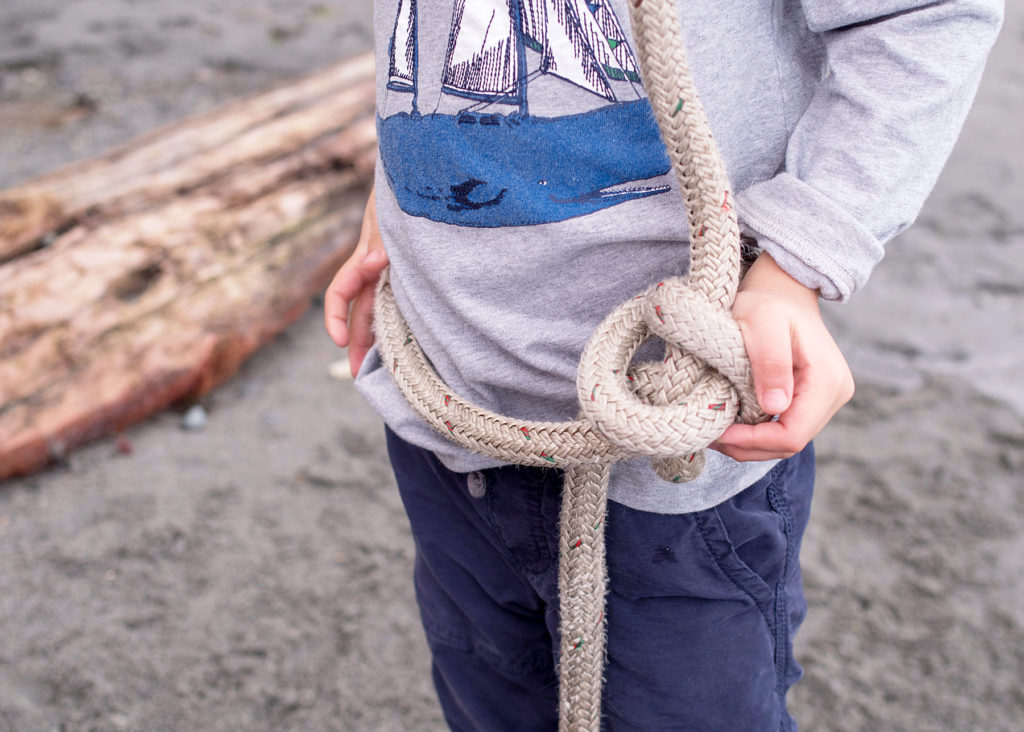 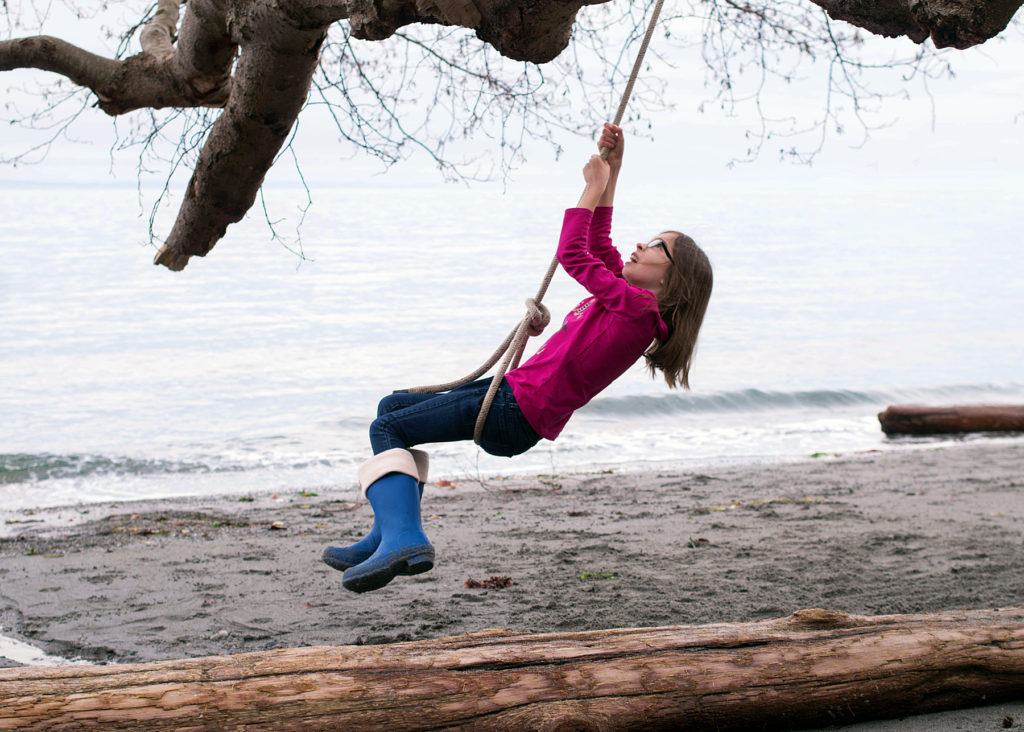 Although it was raining when we set out and I didn’t have high expectations for this outing, it ended up being a perfect afternoon spent exploring together. Arbutus Cove is one of our favourite places to spend time outdoors and we’re so lucky to live just a short bike ride away. Our island beaches are especially beautiful in the winter and I’d encourage anyone to put on their rainboots and see what can be discovered. 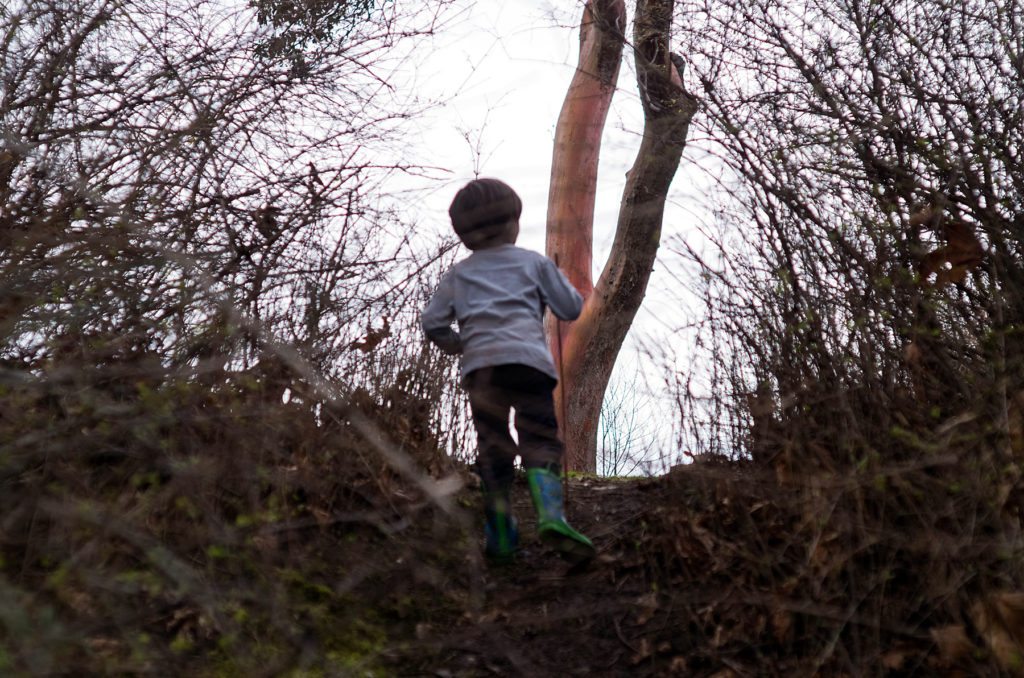 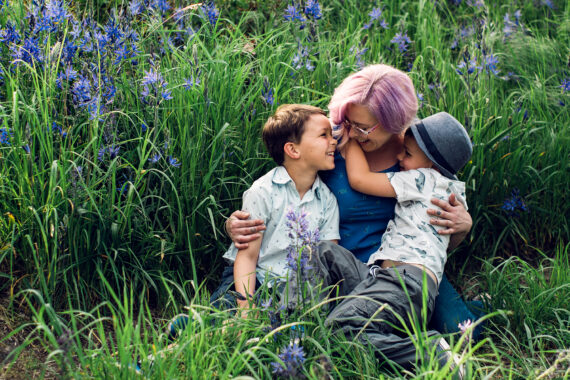 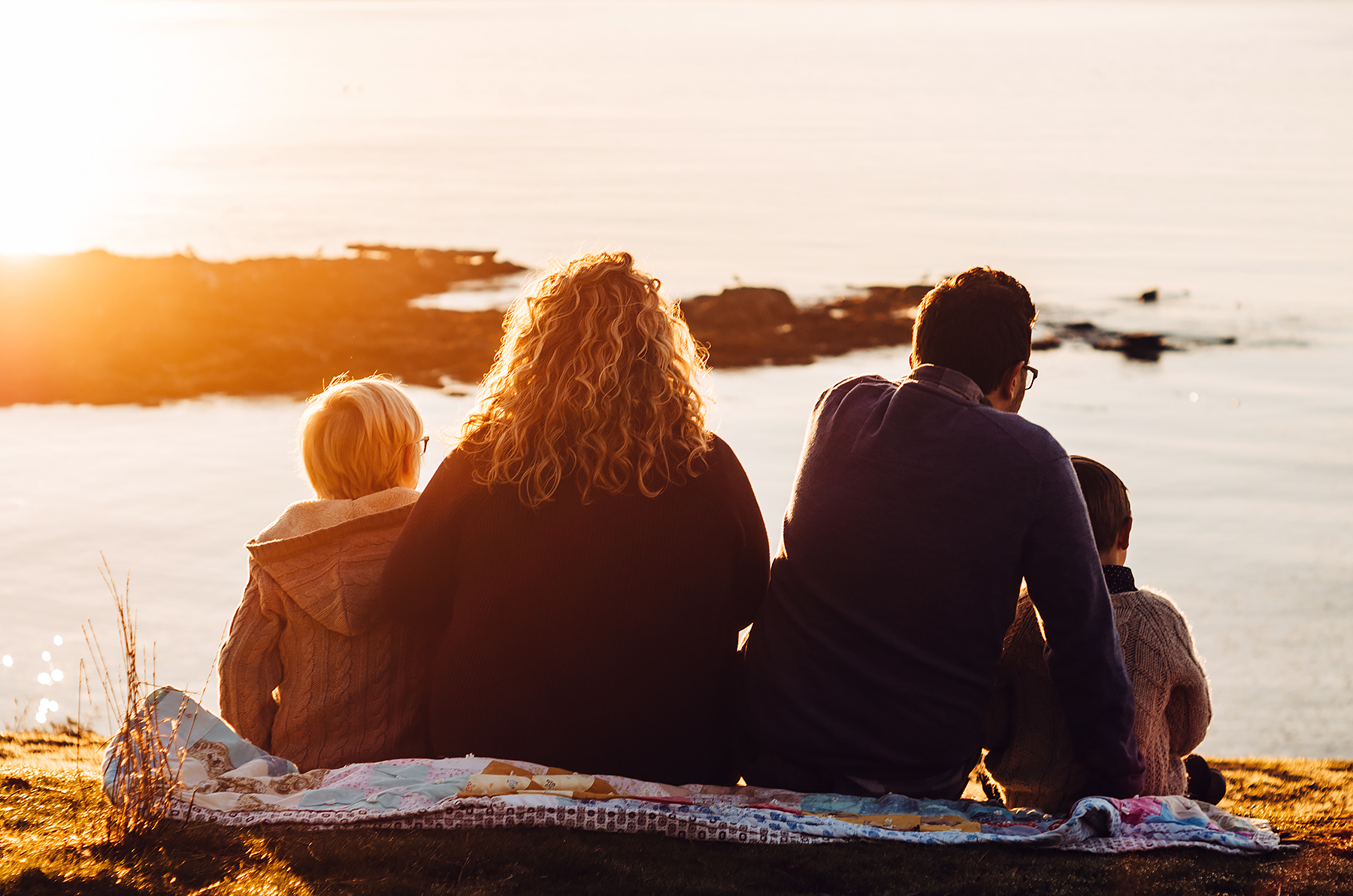 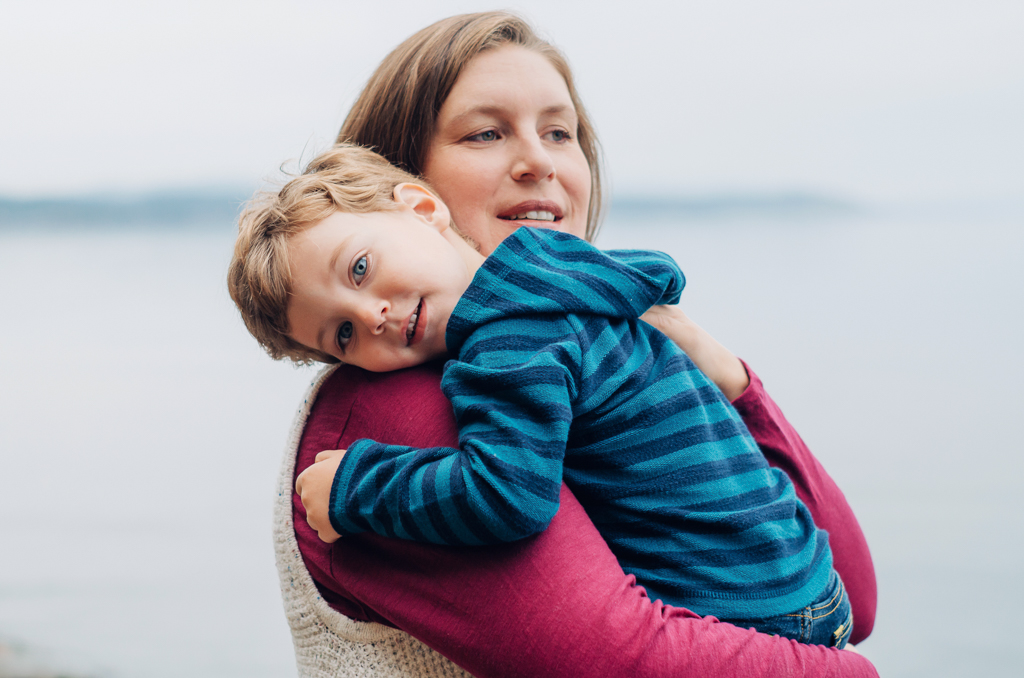